Cancer is a dynamic disease. Over the course of the disease, cancers generally become more heterogeneous. Tumour heterogeneity describes the observation that different tumour cells can show distinct morphological and phenotypic profiles, including cellular morphology, gene expression, metabolism, motility, proliferation, and metastatic potential, all with potentially differential levels of sensitivity to treatment. 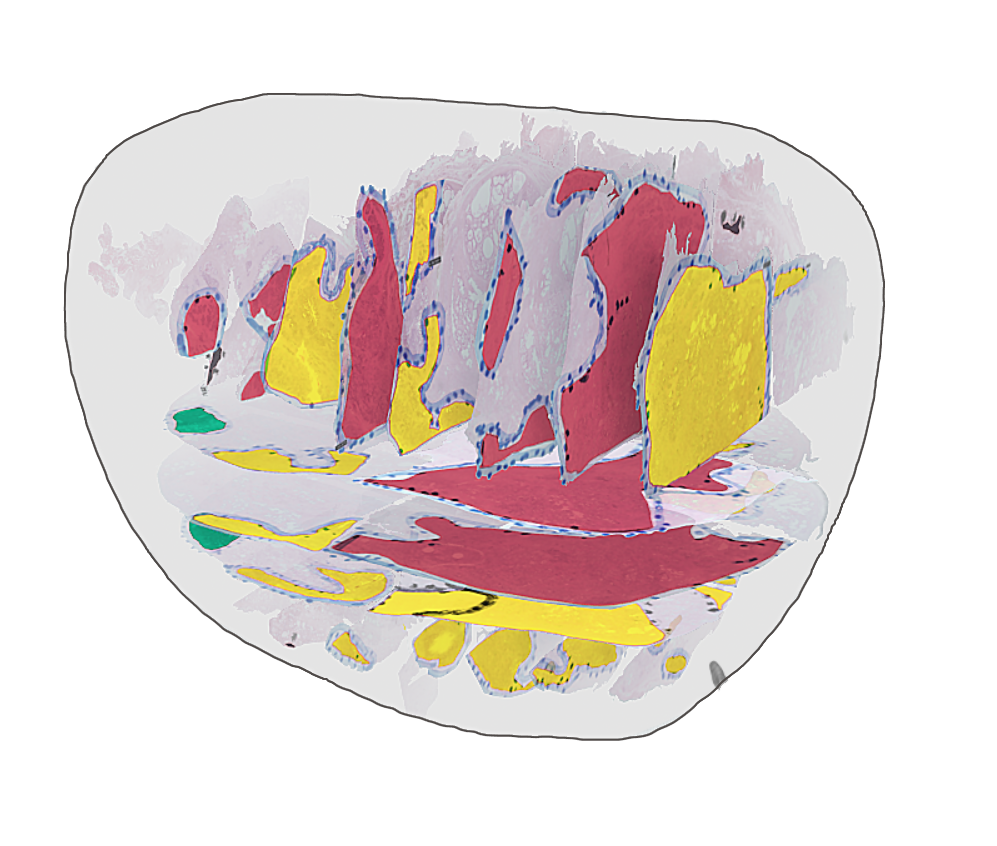 Histological sections from a prostate sample, showing different gleason grades throughout the tumor3D reconstruction On the website domore.no interactive graphics demonstrate 3D reconstruction of prostate cancer. The models were created with digitised H&E stained tissue sections and configured into spatial context. The models are reconstructed using one section from each tissue block. The model to the right visualizes the growth of different tumour populations,showing heterogeniety in regional distribution of prostate cancer biomarkers. In this case Gleason score is visualized, shown as green (gleason score ≤6), yellow (gleason score 7), and red areas (gleason score ≥8).

Inter-tumour heterogeneity is seen when two individual tumours have different attributes, as with multiple tumours in the prostate. Intra-tumour heterogeneity is present when cells within an individual tumour are genetically or epigenetically different. Heterogeneity is present on many levels: the morphology of the tissue, DNA content, transcription of genes, and in epigenetic differences. Usually, only a small portion of the tumour is analysed for diagnosis. This is a major challenge in both clinical practice and research, as a single tumour can contain multiple regions of different and unevenly distributed aberrations that may or may not lead to tumour differentiation and metastasis.

Today, sampling for most markers of cancer is performed on a too-small fraction of a single block of tissue. Sample size plays a significant role in accurate cancer prognostication, especially when we take cancer heterogeneity into account. The sample examined in routine diagnostics is at best 1:1000 of a tumour, and this relatively small sample size means there is a high risk of missing the cells that later may go on to kill the patient.

The pathologists who make the cancer diagnosis require several years for specialisation and many countries experience a major shortage of this specialist group. Furthermore, diagnosis and prognosis are, to a large extent, based on subjective assessments. If the conclusion is incorrect, it may cause additional costs, unnecessary side effects and, at worst, premature death of the patient. The pathologist’s cancer diagnosis is correct in more than 95% of the cases, but prognostication fails for more than 40% of the patients, most likely due to a combination of insufficient methods, subjective variations and insufficient sampling of the heterogeneous tumours.

This high degree of genomic diversity is a major obstacle in clinical practice and research on prognostic markers. At ICGI, we are increasing the understanding of heterogeneity in cancer by following disease progression and analysing samples from multiple tumour regions. Currently, we are focusing on the following tumour types:

In addition, other markers routinely used in the clinics for a given cancer type are included.

Heterogeneity is the main focus in the DoMore! project. For more information go to www.domore.no.

We have previously observed extensive intratumor heterogeneity of Gleason score (89%), DNA ploidy status (40%) and expression of the genes PTEN, BUB3, CCNB1 and PTTG1 in prostate cancer (Cyll & Ersvær 2017, Ersvær 2019). DNA ploidy was a substantially stronger prognostic marker in prostate cancer when heterogeneity was considered, highlighting that a single sample is not always representative of the entire tumour and that multi-sample analysis should be performed to support clinical treatment decisions.

Ongoing studies on prostate cancer focus on intratumor heterogeneity of genes involved in the process of cell division and genomic instability, as well as selected tumour suppressor genes and oncogenes. A total of 759 tumour samples from 253 patients are included in these studies.

Genomic instability is a major cause of genetic heterogeneity. Two major forms of genomic instability have been described in colorectal cancer (CRC): chromosomal instability (CIN) and microsatellite instability (MSI). CIN is classically defined as an increase in the rate at which numerical or structural chromosomal aberrations are acquired in a cancer cell and is present in the large majority of CRC (about 70-85%). MSI is defined by changes in the number of repeating units of microsatellite repeats (short repeating units of 1-6 base pairs) due to defects in the DNA mismatch repair (MMR) genes, such as MLH1, MSH2, MSH6, and PMS2. MSI is detected in about 15% of all colorectal cancers and 3-5% of metastases.

Studies are ongoing, and the following features will be assessed in all 1366 tissue blocks:

A number of prognostic factors have been studied in lung cancer, but thus far, none have been found to be better than the stage of the disease. Lung cancer is known to be very heterogeneous, which could be a reason for the lack of functional prognostic biomarkers. A clinically ideal biomarker should provide high discrimination power between high- and low-risk (i.e., a high degree of decision support), be universal, inexpensive, and, if possible, automatic to avoid scoring variability. It will be particularly interesting to establish one or more markers that may indicate whether patients that are normally thought to be at low risk have sufficiently increased risk of recurrence and cancer death to warrant adjuvant chemotherapy. Furthermore, we are interested to see whether patients normally thought to be at intermediate or even high risk have a sufficiently low recurrence and death rates to safely avoid adjuvant chemotherapy. Either of these findings would suggest that the biomarker enables more appropriate selection of candidates for chemotherapy after resection of lung cancer and if implemented in the clinic, may increase survival or reduce the morbidities and costs associated with lung cancer treatment, thus resulting in more optimal usage of limited health resources.

By accounting for intratumor heterogeneity, we aim to increase the prognostic accuracy of the following biomarkers:

The study includes lung cancer specimens surgically resected from patients at OUS in the period from 2006 to 2018.

The study of heterogeneity in endometrial cancer will follow the same design as described above. A total of 2871 tissue blocks from 1105 patients will be included in total, and the following biomarkers will be assessed: